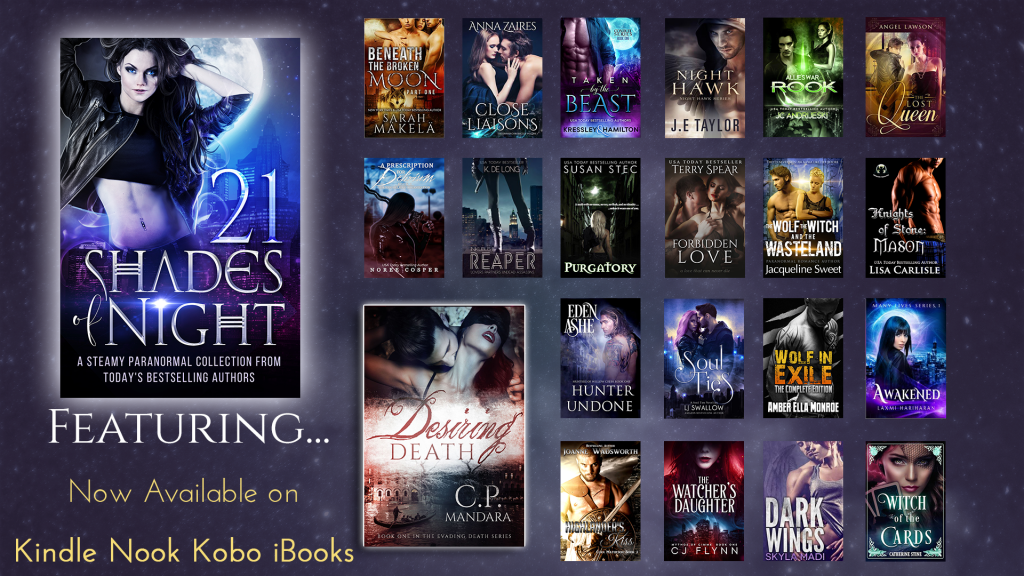 Desiring Death is C.P. Mandara’s contribution to 21 SHADES OF NIGHT box set.
For a tiny 99c you can own 21 wicked novels from today’s NY Times, USA Today, and International Bestselling Authors. 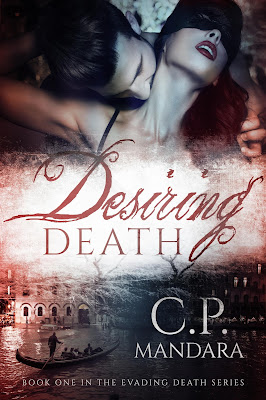 Imagine a famed vampire huntress with a taste for death, so successful not a single vampire has ever managed to escape her wooden stakes or evade her silver knives. Her name is Violetta, and all that is about to change.
Monsieur Martinet, vampire extraordinaire, is a master of his kind and can exert the kind of control over humans that Violetta has never seen before. He is a powerful force. He may well be unstoppable. And that’s going to be a problem, because Violetta has killed every single one of Martinet’s monstrous family – and he has a score to settle.
He’s going to abduct her, imprison her, and then tie her down until she begs for mercy. And that’s only the beginning…


It was all she could do not to break into a fast run as soon as her feet hit the gravel drive of the Castello, but running would attract the kind of attention she did not need, so even though all instincts were screaming at her to make a break for it, she reined herself in. She did not turn her head to admire the elegant stone portico reception with its high plasterwork arches and intricate artwork, she did not stop to retrieve her beautiful shot silk shawl that had been deposited with a coatroom attendant on arrival, and she did not respond to any of the eager male glances being directed her way. She’d had quite enough of men for the evening.
Concentrating on weaving her way between the tiny borders of the boxed hedge garden, she made her way past trumpeting angels spouting fountains of water and large topiary arrangements of neatly clipped, cone-shaped trees. The front of the Castello walls had a panel of hedging that had been arranged into crenelated lines, resembling that of a fortress. It would have been a beautiful sight to behold had she not had her mind on other things. Listening to the grit crunch below her feet she slipped and skidded, wishing she’d thought to retrieve her shoes. Heels weren’t much use for running, though. Setting her sights on the soft glow of lamplight from the street just beyond the imposing cast-iron entrance gates, she walked as fast as her legs would allow her. When she finally reached the solace of the cobbled street and the castle gates had disappeared from view, she broke into a sprint and let her feet fly.
The adrenaline running through her body was at overload status. Every sense was on high alert. She listened for the tiniest sounds, kept her eyes peeled to all that was going on around her, and embraced the cool night air as it whipped her hair into a violent tangle. Violetta had a plan.
It was a relatively simple one. She needed to get herself inside hallowed walls, and those of St Mark’s Basilica would work very nicely. He could not follow her inside there. No vampire alive would ever willingly step inside those holy walls.
In her rush to escape, she found her bare feet tumbling over uneven cobblestones, but she refused to slow her pace. Time would be of the essence. Even though she was carefully guarding her thoughts, Martinet would soon realise that the image of herself chatting to her friends in the grand ballroom was a false one and there was only so much chatter and small talk that could be invented by one mind alone. If she concentrated, she might gain ten minutes. It might sound like a long time, but to a vampire that could move at the speed of light and travel with the wind, it was no time at all. He’d be able to make up the distance in the blink of an eyelid.
As her next footfall landed her shoulder gave out a sharp jolt of pain. It made her gasp but did not slow her down. Distance, it appeared, would have its own pitfalls. It was quite possible that the vampire could only provide pain management and mind control if she were nearby, thus the more distance she managed to place between herself and the beast, the more her shoulder would pain her. She was soon going to find out, one way or another.
‘Distance isn’t much of an object for me, now that a drop of my venom is in your veins and you can finish with the delightful drivel you are currently pretending to voice to Georgette. Your friends left the building five minutes ago.’
The sound of his gravelly voice in her head had her gulping for breath and stumbling simultaneously. She immediately panicked. There would be no time. His hands would be all over her in an instant and she would be destined for nowhere but death. Her body teetered forward, balance skewed drastically to the right, before she managed to steady herself.
‘Don’t stop on my account, Princess,’ he purred darkly. ‘I’ve got to pick up my coat. That should give you a fighting head start, ma chérie. No one rushes around in Italy, bar you apparently.’ There was a small pause as he cleared his throat. ‘Oh, one more thing. As you blatantly disregarded my instructions, the pain management stops. Consider it part of your punishment, although we’ll work on some finer aspects of correctional behaviour later this evening. If you think that bottom of yours stings now, you wait until I’ve finished with it this time tomorrow. That purple dress of yours is going to look so pretty, ripped to tiny smithereens on my red satin sheets.’
About C.P Mandara

Christina Mandara was born in the UK, but has spent most of her life travelling the world. She speaks three languages and has been chiefly employed in the fields of finance and travel. Her favourite city is Sydney and her favourite holiday destination is the south of France.She loves keeping fit and enjoys running, cycling and water sports. Think surfing or sailing. She’s a big fan of BDSM in all of its glorious forms, and her favourite item in the toy closet (a box simply isn’t big enough) is her riding crop.In her spare time she’s usually cuddled up with a good book, exploring the countryside or baking in the kitchen. In fact, she loves her kitchen so much she’s one of few woman who wouldn’t mind being tied to it! Her first and foremost love is writing, however, and more often than not you’ll find her on a laptop spinning tales of romance, erotica or dark, paranormal fantasies.
Find C.P Mandara here: