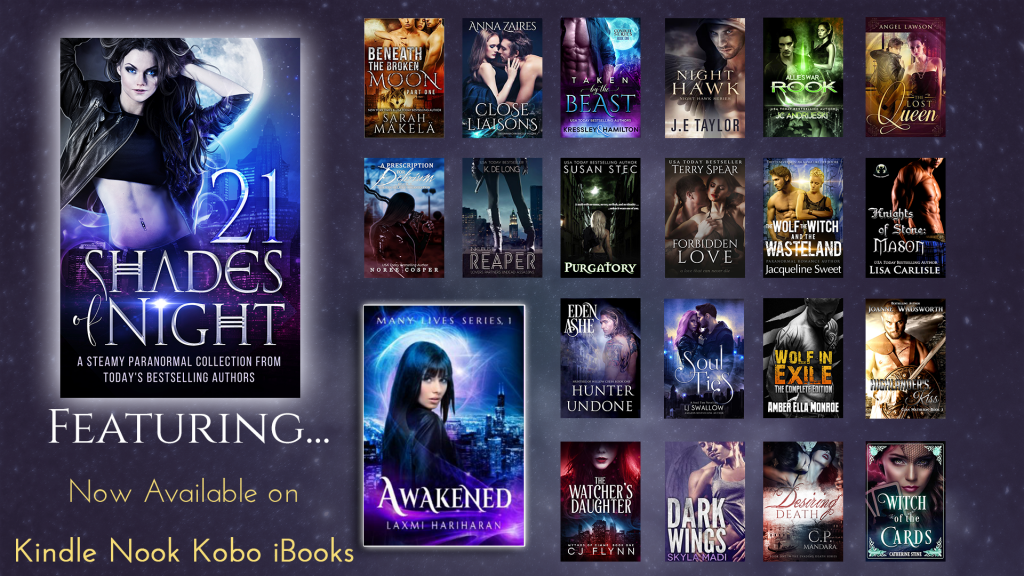 Awakened is Laxmi Hariharan’s contribution to
21 SHADES OF NIGHT box set.
For a tiny 99c you can own 21 wicked novels from today’s NY Times, USA Today, and International Bestselling Authors.


Ruby Iyer must save her city, save her friend, save her very soul from being destroyed and only sexy cop gone rogue Vik Roy can help her. Except Vik has a secret; one that will turn her world upside down. Can she still trust him?
Criminals run the streets of Bombay. Jam-packed with the worst degenerates. The city is a shell of the pride and joy it used to be. Ruby knows something must be done, but it isn’t until her best friend is kidnapped that she knows that she and she alone must save city, save her best friend, save her soul from total destruction. Armed only with Vikram, a sexy cop-turned-rogue they are about to embark on a road they may never return from.
What they say
“Laxmi is a storyteller who knows how to build worlds populated with endearingly down to earth bravehearts.” – Inma Martinez, world leading digital media strategist.
“…A novel that presents so much more than a singular, easy path.” – D. Donovan, (Midwest Book Reviews)
Awards
Finalist, 2016 Next Generation Indie Book Awards
2015 Readers’ Favorite
Finalist, 2015 IAN Book of the Year Awards
Finalist, 9th Annual Indie Excellence Awards
Excerpt
His tongue flicks out to touch his lips. Can he still taste blood?
His eyes flick to my lips, down to my throat, my breasts, lower, lower still. I’m close enough to see the golden flecks in his eyes shine. Smell that hard man smell of his which tugs at me. Heat from him spools towards me hitting me squarely in my chest, pulling at my stomach, churning my guts and I shudder.
His eyes widen, and as if unable to help himself, he lowers his mouth brushing my lips once, twice, thrice. Teasing me, nibbling at me, caressing my lips till I feel the heat inside twist and glow, till the lighting tree on my back sizzles, sparking fire.
I moan and reaching up capture his mouth with mine, thrusting my tongue against his; and feel the shock run through him.
He’s still just for a second, then he’s leaning into me, on me till I am surrounded by him, his touch, his skin, that cinnamon smell of his, which is so Vik. Heat from his body pushes at me, begging to be let in, holding me captive and I feel a trickle of sweat running down between my breasts. Breath coming out in short bursts, I strain against him, trying to free my shackled arms, but he doesn’t let go. He also doesn’t stop there.
His mouth lowers to my throat, pushing aside the bathrobe till he bares the curve of my shoulder, then bites me, lightly.
My heart slams against my rib cage at that, my eyes flutter shut and I bite my lips to stop myself from crying out. At the pain trembling down to my belly.
He kisses the skin, licking his tongue over the exact same spot and this time I shiver, but he’s already trailing his lips down to my breasts. His hand grips the flare of my lips and this time, I moan aloud as his fingers splay out over my belly.
And it’s as if the sound gets through to him, for he’s suddenly leaning back.
My eyes fly open and I look up at his face, want to trace his lips, run my fingers through his hair and once again I arch my back, push against him and this time he lets me go.
Even as I watch a shutter comes down over his eyes and they lose that bright glow I’d seen there just a second ago.
I know then, he’s going to leave and walk away and I can’t let him go.
Not now, not when I can tell he’s feeling something for me.
When my insides are churning as if this is the only thing that matters. When the emotions overwhelming me wipe out all that has happened before this, making me feel clean. When I don’t care who he is, or where he comes from or what his real relation is to Dr B. When something inside me senses that deep at his core, where it matters, he is honest at least as far as whatever ‘this’ between us is concerned.
I want him.
And I want to make him want me.
Make him show me how much he wants me.


I am fascinated by the unseen in the real world and in relationships. I write fast-paced urban fantasy romances, with a paranormal twist. My stories feature intense love-interests, kickass heroines, moody heroes and surprise plot lines. I enjoy nothing better than getting under the skin of my characters and especially when they surprise me.
I’ve worked in the TV industry, helping to launch TV channels across Asia, Africa, Australia and Europe. I blog for the Huffington Post among others, and have been covered in various publications including The Guardian and The Times of India. Married to a filmmaker and fellow author, I live in London and am the proud owner of a mononym twitter handle @laxmi
Receive a free starter library of my books when you sign up to my newsletter http://bit.ly/NewsletterLH
Suggested reading order in The MANY LIVES Series (Each is a standalone book)
The Ruby Iyer Diaries
Many Lives (of Ruby Iyer)
First Life (of Vikram Roy)
Second Lives
Find Laxmi Hariharan here: