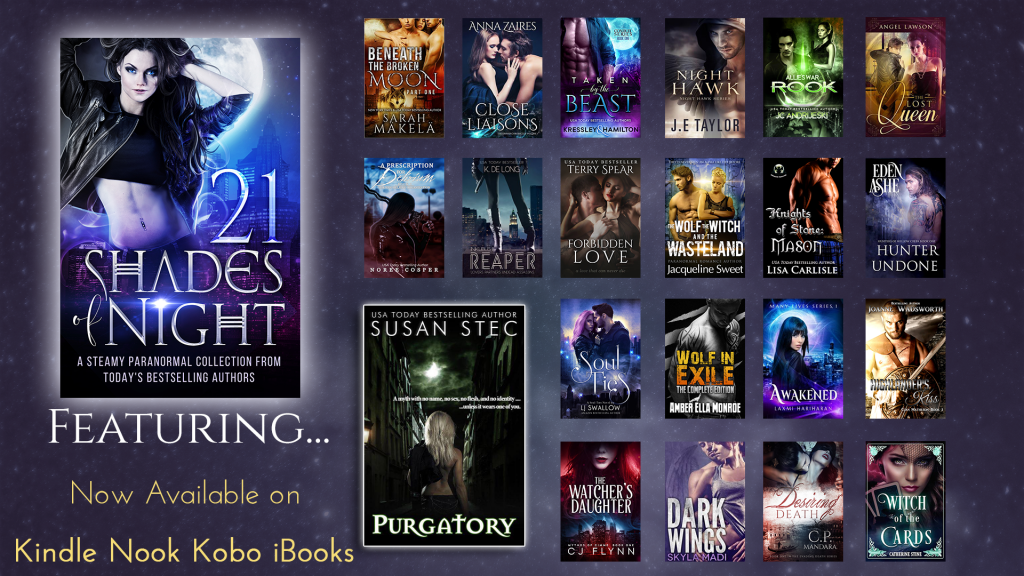 Purgatory is Susan Stec’s contribution to 21 SHADES OF NIGHT box set.
For a tiny 99c you can own 21 wicked novels from today’s NY Times, USA Today, and International Bestselling Authors. 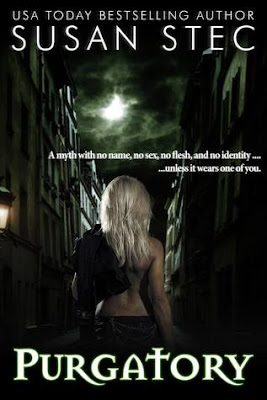 A doppelganger, a myth with no name, no sex, no flesh, and no identity…
…unless it wears one of you.
I spread out like a shadow on pavement under the feet of an unsuspecting woman working her corner in the seven-hundred block of South Orange Blossom Trail. Her name is Jane, and I will be wearing her by morning.
As she drags me along, I watch, listen, learn . . . and I think about Gaire. Although I knew something was different about him, I’d never, for a moment, expected Gaire to be a wendigo. Damn, talk about having a penchant for bad boys. That little proclivity might chalk my ‘no killing humans’ rule up to multiple charges of aiding and abetting before this insanity ends. And it will end, badly, if I don’t get Gaire out of my doppelganger head. I know I should just forget him—I’m sure he’s forgotten me—but Gaire is the first and only being who has made me feel real, alive, and, well, human. I’ll be damned if I’m giving up on that.
As I stare up at Jane from the pavement, I’m thinking how perfect this chick would be. I could head back to Leesburg, she would stay in Orlando on her street corner, and our paths should never cross. Unless it’s in a morgue somewhere—a street-walker’s life is a hard one.
In her early twenties, Jane is blonde and tan, wearing a lewdly short skirt and a lacy bra barely covered by a leather vest. Black boots with four-inch heels caress the undersides of her knees as she struts toward a car pulling up to the curb a few yards down from the streetlight on her corner.
I cozy up closer as Jane leans toward the black sedan, filling the window with the contents of her lacy bra. I slither upward off the pavement, over the front tire, another moving shadow on a street accustomed to shadows.
About Susan Stec