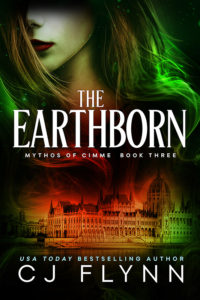 Buy The Earthborn on Amazon

I had never been in an official interrogation room before, but I suspected that the dark, bare room Sloane Warne had stuck me in would probably pass muster. Liam & Lydia Elridge, Ben’s parents, had hired her in the aftermath of Ben’s disappearance, and it was my turn for questioning.

Sloane Warne was a lanky woman with dark blonde hair and red eyeglasses. If I’d met her on the street, I would have pegged her as a librarian or teacher, definitely not a PI. She entered her interrogation room and slid a folder across the table towards me.

“This is what I have so far, Ms. Stuart. I don’t intend to treat you like a suspect, unless something new comes to light. Your alibi checks out, and at this point, I think this will work better if we just play nice.”

I looked up at her and let my hold on my tracing ability slide. Indigo. It took me a minute to better understand her ability—she was a psychic. Either a perfect ability for a PI or a perfect ability for a reality TV show. I wasn’t sure which. I had never met one before, but I’d heard of a few. I would have to figure out a way to put my hands on her to see what she was capable of, but it wasn’t exactly an easy thing to do without causing a fuss.

I wiped my hands over my face, trying to get my thoughts back to the matter at hand. Lydia Elridge had been waiting on my porch when I returned from Florida at 4 in the morning. She had announced Benjamin’s disappearance with a grave tone, and had given me no space for argument. We’d left immediately for the Manhattan offices of Sloane Warne. I had no idea what time it was, but I was past the point of simple exhaustion. I needed to answer her questions and get some sleep.

“Start at the beginning. Go back to when you last saw him.”

“It was Christmas Night. In Paris. I was getting ready for a…job.”

I wasn’t sure how much this woman knew. I hadn’t heard of her before, and though she obviously knew something about Peculiars, I didn’t know her involvement in the world of Sorrell and the other vampires.

I continued on, trying to make sure I gave her as much information as I could without making assumptions of what she did or didn’t know. “He came to see me before I left, and we had a fight. He wasn’t there when I returned, and I left several voicemails on his phone.

“I went by his place two days ago, on the third of January, to see if he would answer the door. His neighbor told me she hadn’t seen him since Christmas.”

Sloane looked down at a typed page in front of her. She tapped a line of text about halfway down the page. “We have reason to believe Ben was home briefly, on the twenty-sixth. Do you think it’s possible his neighbor didn’t know he was there?”

I frowned. His neighbor, Mrs. Baker, was in her eighties. She saw a lot, but it was possible she’d missed something. I nodded. “Yes, I guess so.”

“I haven’t had the chance to go to his apartment yet. The Elridges contacted me the day before yesterday, but I was out of town. Would you be willing to take me there? It’d save calling Lydia back down here.”

I hesitated. I had a key to his apartment, but I didn’t have a nice, neat definition for my relationship with Ben at the moment. We’d left each other in Paris, after I’d said no to his sweet, but ill-timed marriage proposal. I’d chosen to go on a mission for Sorrell, and Ben had made it very clear I was choosing the vampires over him. I’d left him in that hotel room, and my whole world had turned upside down since. My best friend was dead, there was a new vampire Queen, and I had killed a man.

And that was before I found my stepmother and learned I had two half-sisters.

The cheerful hotel breakfast of croissants and cafe au lait in Paris was a lifetime ago.

I turned my head away from her for a moment, before catching her gaze. The most important thing I could do was to help find him. Ben and I could hash out details later. “If the Elridges agree, I don’t mind taking you there.”

“It’s standard protocol. They’ve signed off on everything.” She took the investigation folder back and stood up. “You can grab your things while I call a cab.”

Ben’s studio was only fifteen minutes up town. We made it to his building just as the sun began to rise over the East River.

I punched the button for the fifth floor as Sloane held the door open for a young man still dressed for a night out. We all stood in silence until he got off at the third floor and Sloane let out a sigh.

“The jacket is pretty sad,” she said. “He bought it used at a thrift store, and it’s got a solid six or seven years of bar grit and tequila-driven love affairs on it. Nothing happy ever happened to anyone who wore it.”

I stared at her as the bell chimed and the door slid open. “Do you do that sort of thing for birthday parties?”

Buy The Earthborn on Amazon